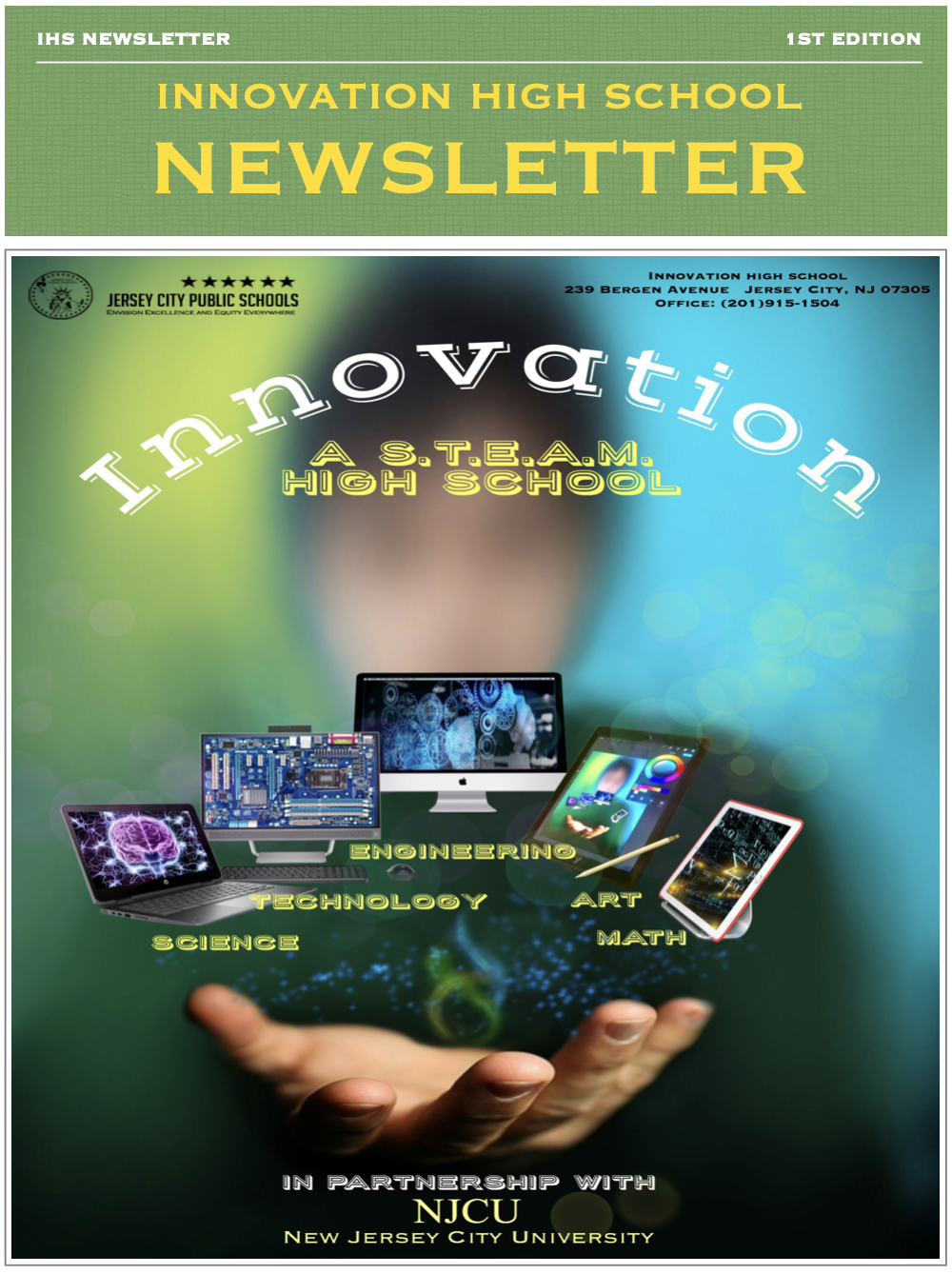 During October 2021, I collaborated with Ms. Ramirez to create a project in honor of Hispanic Heritage Month with my Creative and Critical Writing students.  The goal of the assignment was for students to research a Latino writer and then write an essay about the influence their writing had on society.  My students were given the option to choose any Latino writer of their choosing.  I hoped that by letting them have the option of choosing who they would like to research, it would create a space of curiosity and inspiration for them as well.  My creative writing students are a mix of all races and religions, and I hoped that they would be able to connect with writers who come from different backgrounds similar to them.  After writing the essay, four of my students: Ryan Ventura, Kevin Mendoza, Brendaly Mejia, and Ciara Wade volunteered to present their research at the Hispanic Heritage Month showcase event hosted by Ms. Ramirez. At the event, my students were able to present about how the Latino writer they researched had an influence on society through their writing. 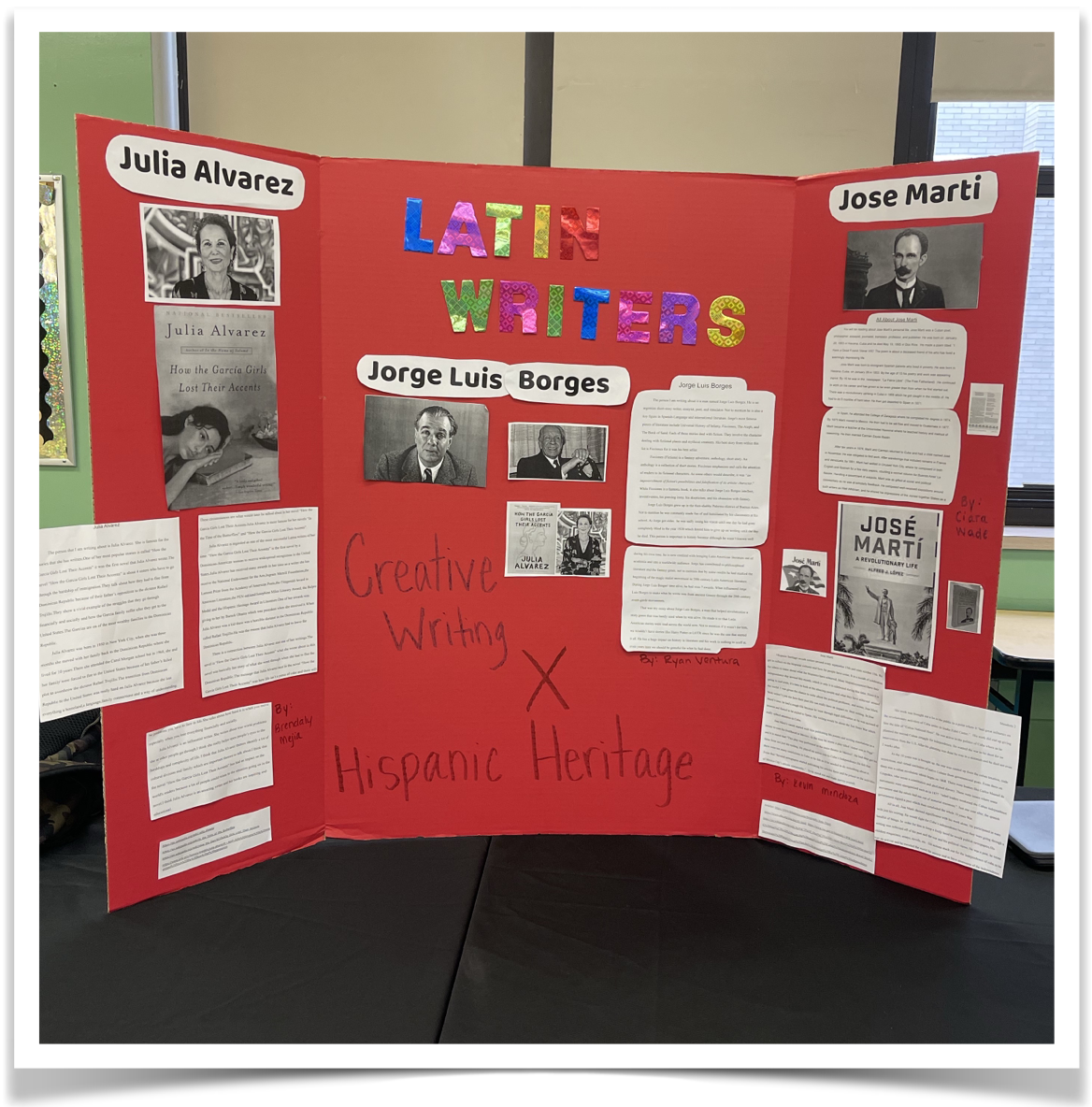 Five Students are competing in a CODERZ Pro league programming competition.  Students compete virtually by programming a virtual robot to successfully complete tasks.  The team completed the first round of competition and finished 6th out of 50 teams competing in this league.  The first round was comprised of schools from various school districts in the U.S.  They made the playoffs and now compete against the top 65 teams in the world!  Jonathan Nguyen, Derek Tran, Jenna Espedilla, Keval Bhagwandeen and Beshoy Kamel are the students that are working hard to make the finals and represent our school on the virtual world stage. 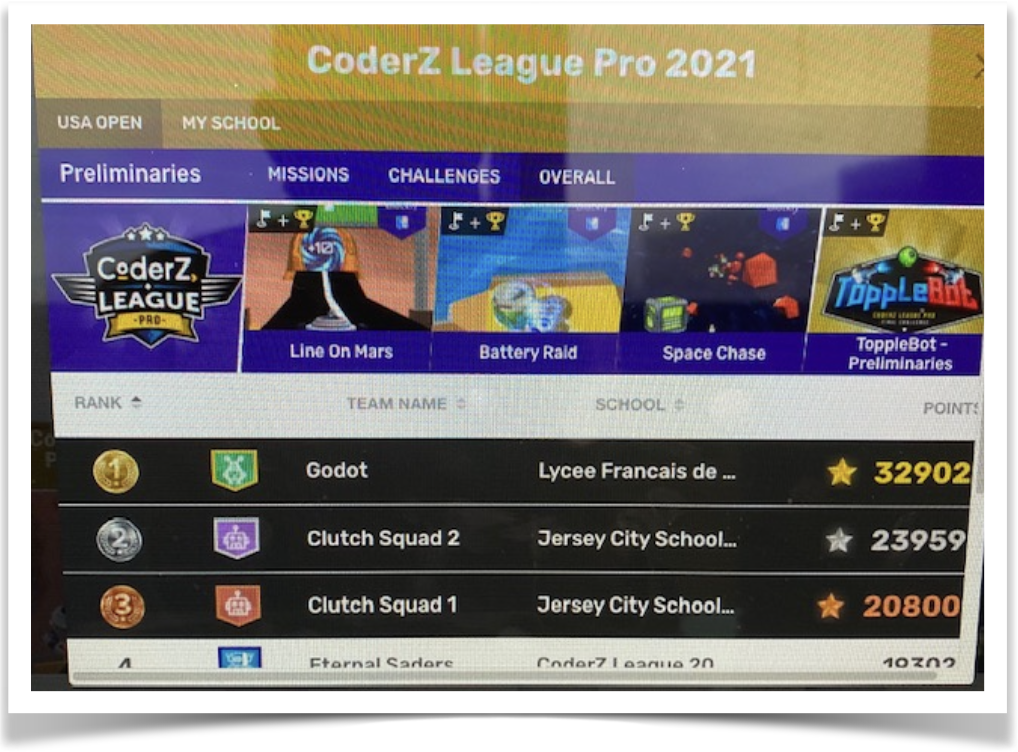 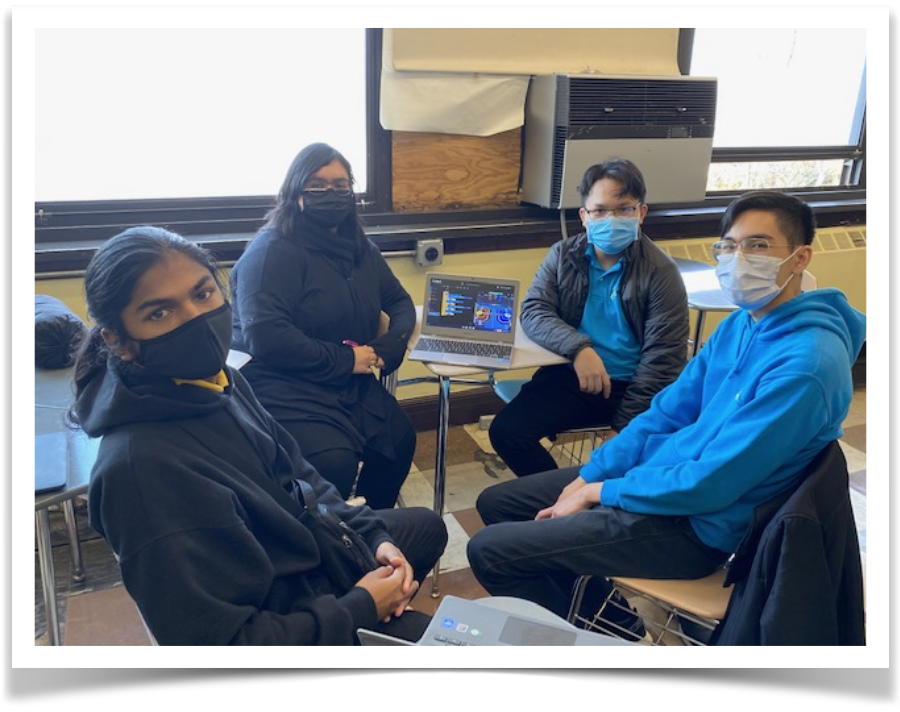 In Marking Period 1, students in Geometry were tasked with applying geometric terms and coordinate geometry to their lives. Students had to pick a place of their choice, museum, amusement park, neighborhood, or anything relative to their interests. Following, they had to provide a brief history, draw a floor plan on a coordinate plane, and create real life  application questions based on their choice of place. In this example, John Paul Delgado chose to create a story about Central Avenue in Jersey City. 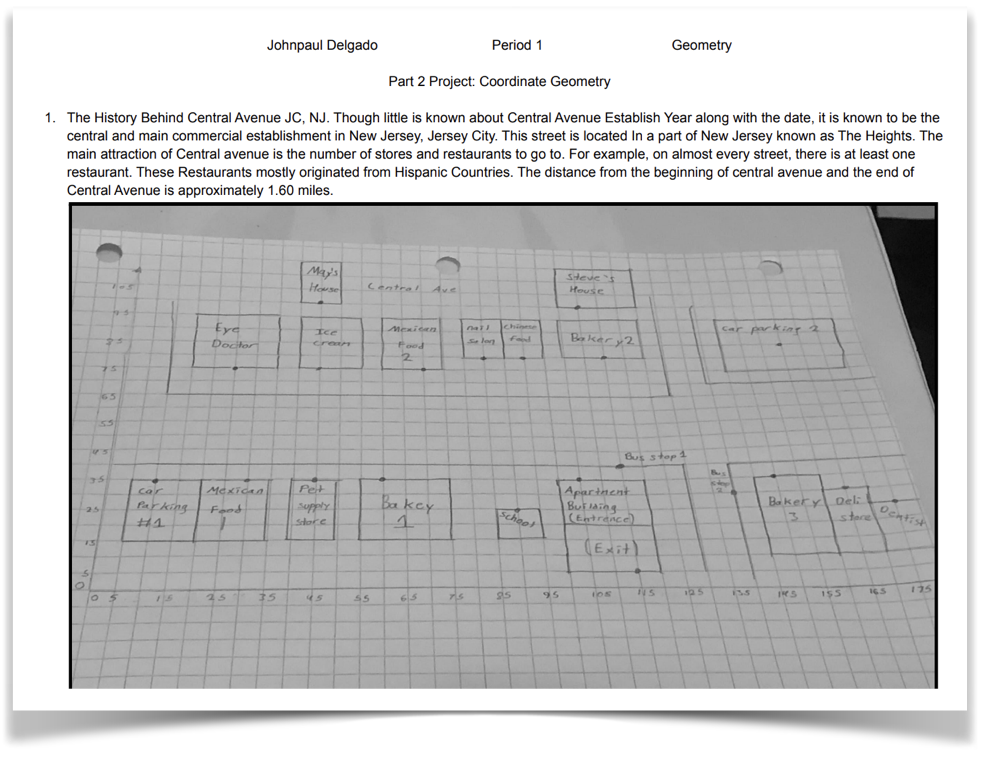 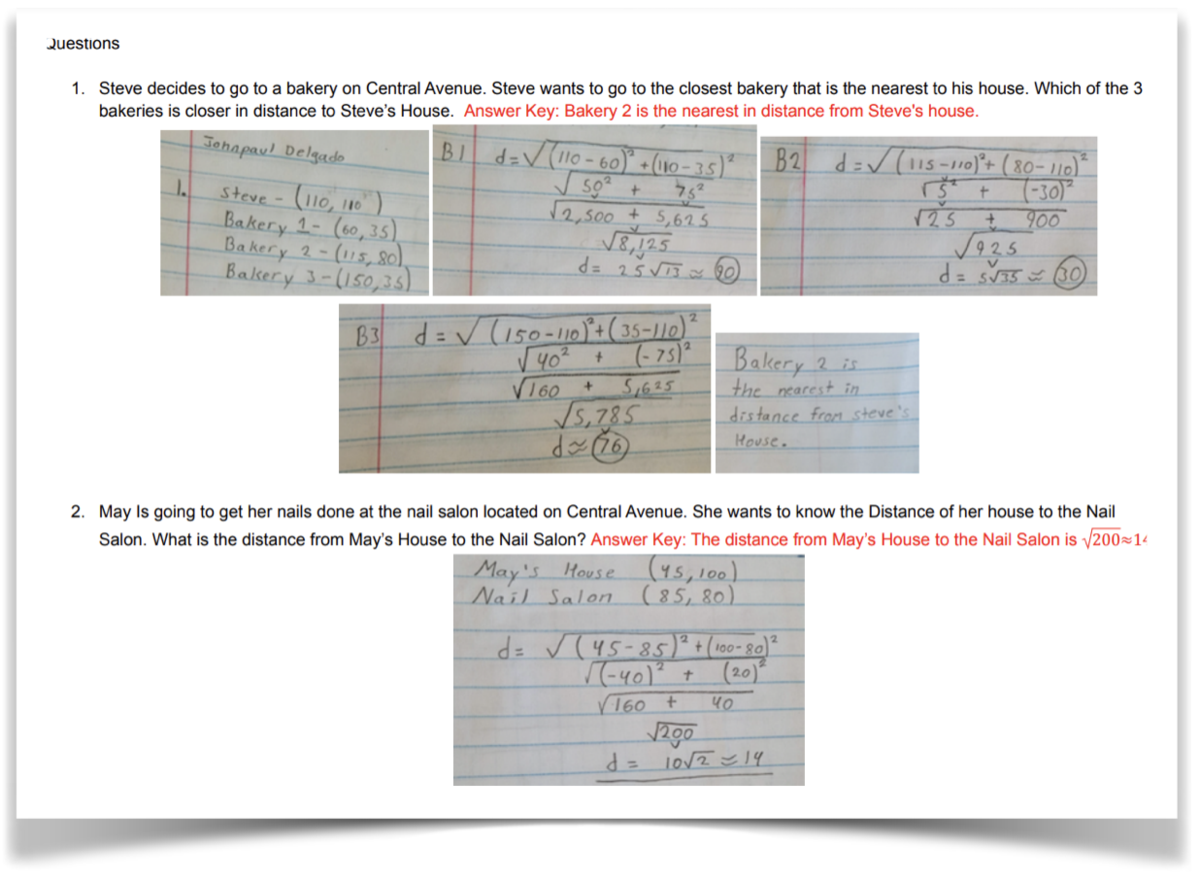 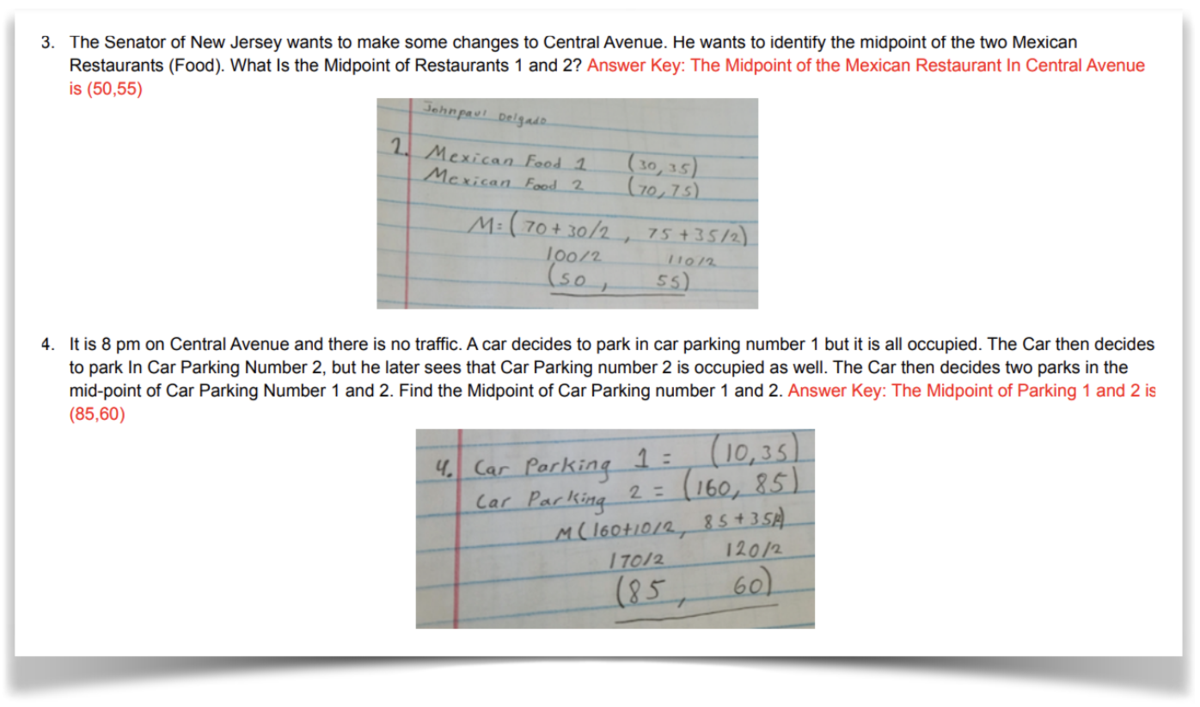 Health 3/Driver Education students created their own public service announcements discussing safe driving rules and regulations. Each group chose 3 do's and 3 don'ts of driving from chapter 4 and recorded, edited, and presented their PSAs. Video, audio, and captions were included to cater to a variety of viewers and learners.

The School Counseling Department at Innovation HS is excited to announce that so far the Class of 2022 has had over 30 college acceptances and has earned a total of $1,608,000 in scholarships.  They have taken advantage of the Instant Decision Days here at Innovation and started their winter break with their college acceptances and scholarship awards on hand.  WAY TO GO WOLVES!!  Now, let's keep that momentum going! 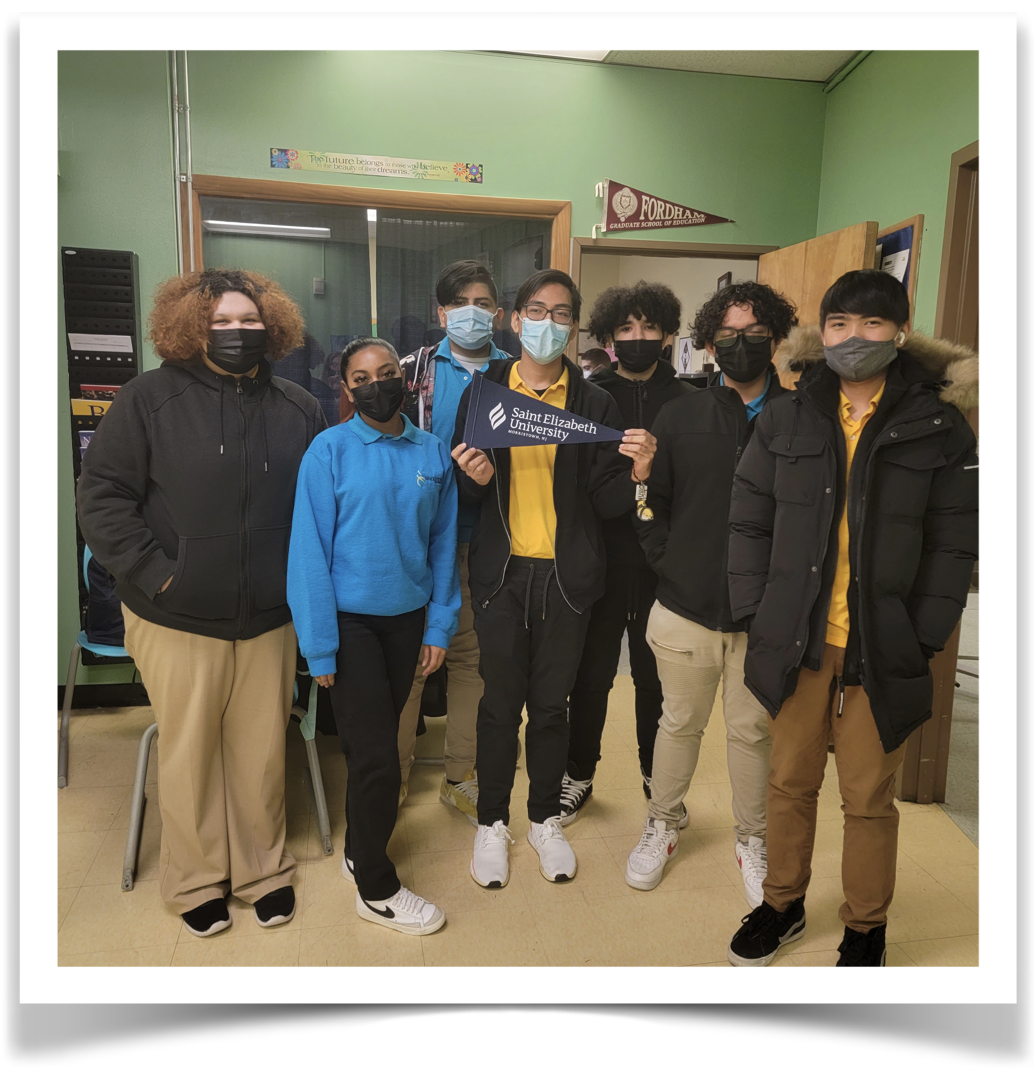 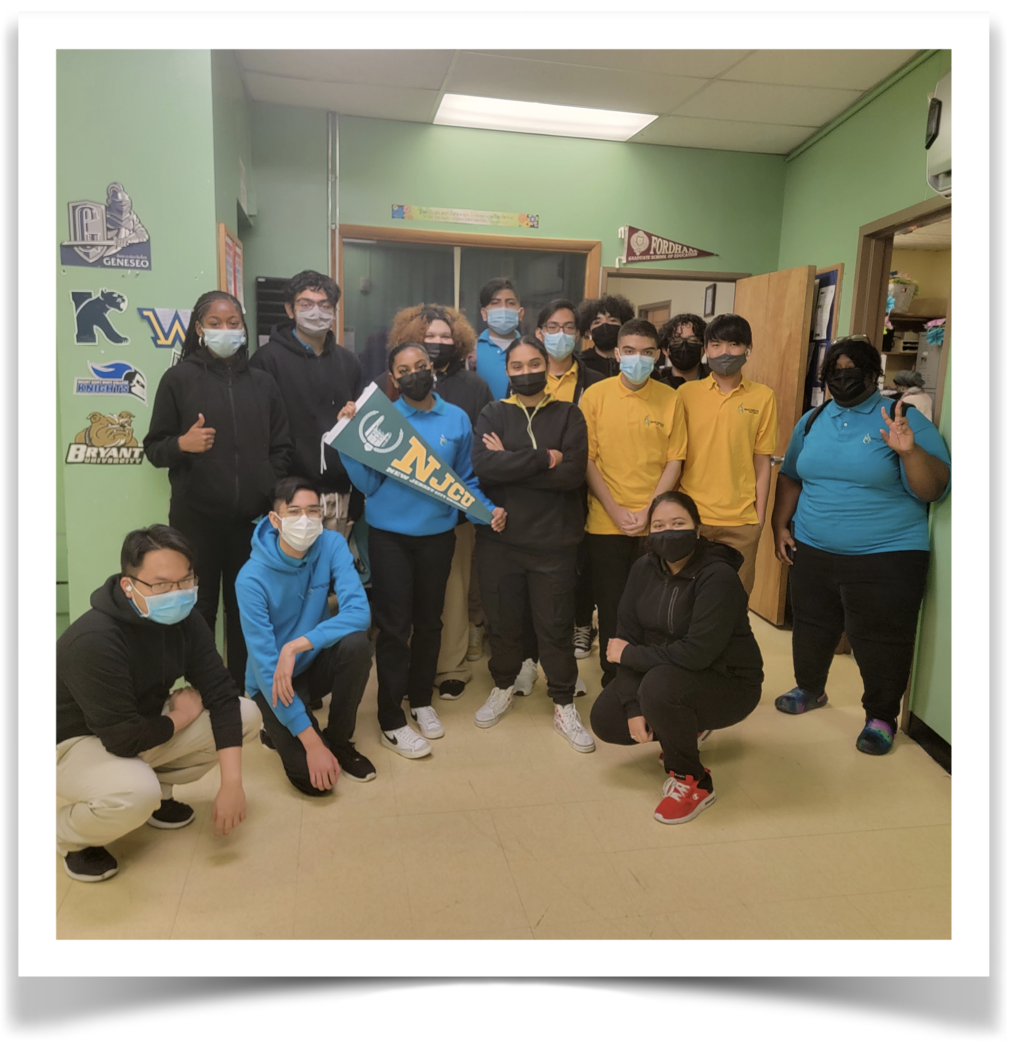 Students explore open ended questions about themselves and their world while simultaneously learning techniques to produce audio and video media. “What is your mission?” explores student’s life goals and family heritage.  “Conveying Meaning through Sampled Audio" explores sampling Martin Luther King’s “I Have A Dream” in an original composition.

Project “What Is Your Mission”

"They are writing Chinese characters in a calligraphy art way better than regular native teenagers.” 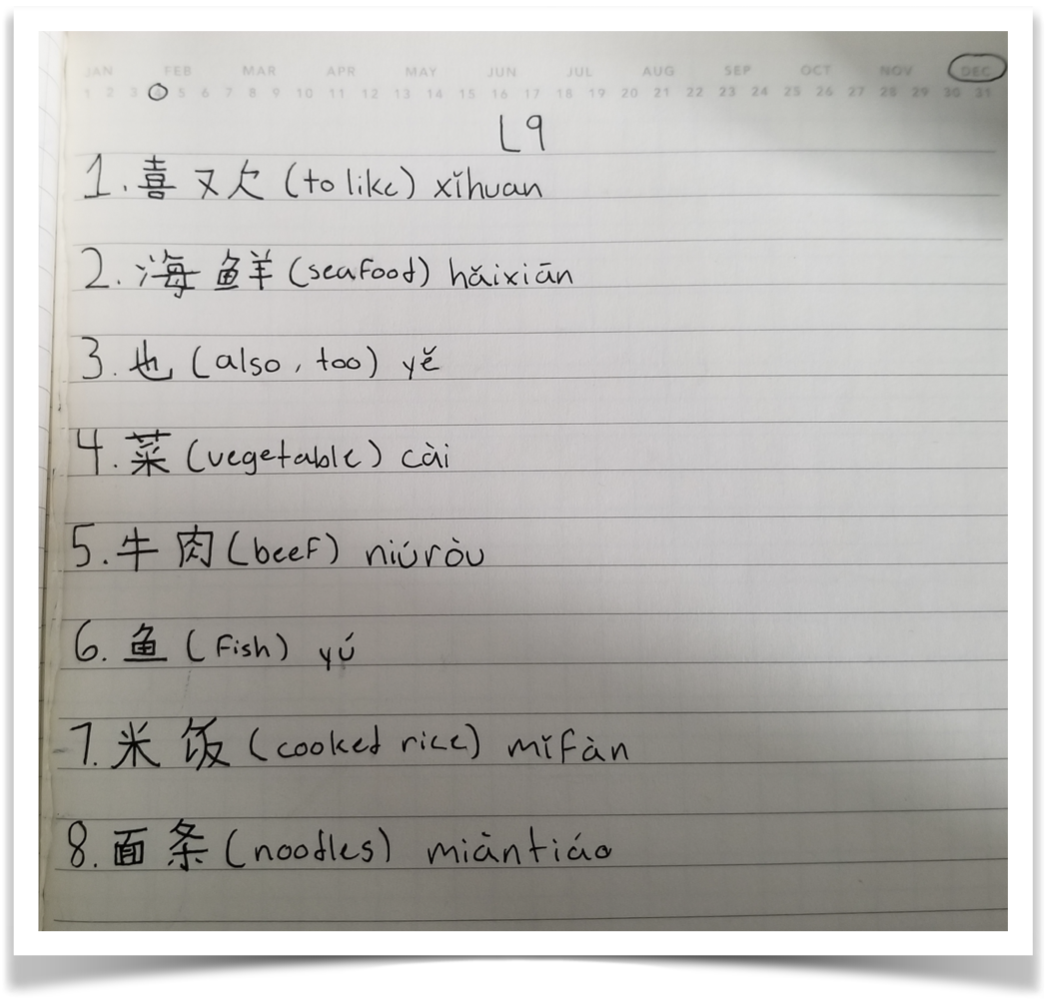 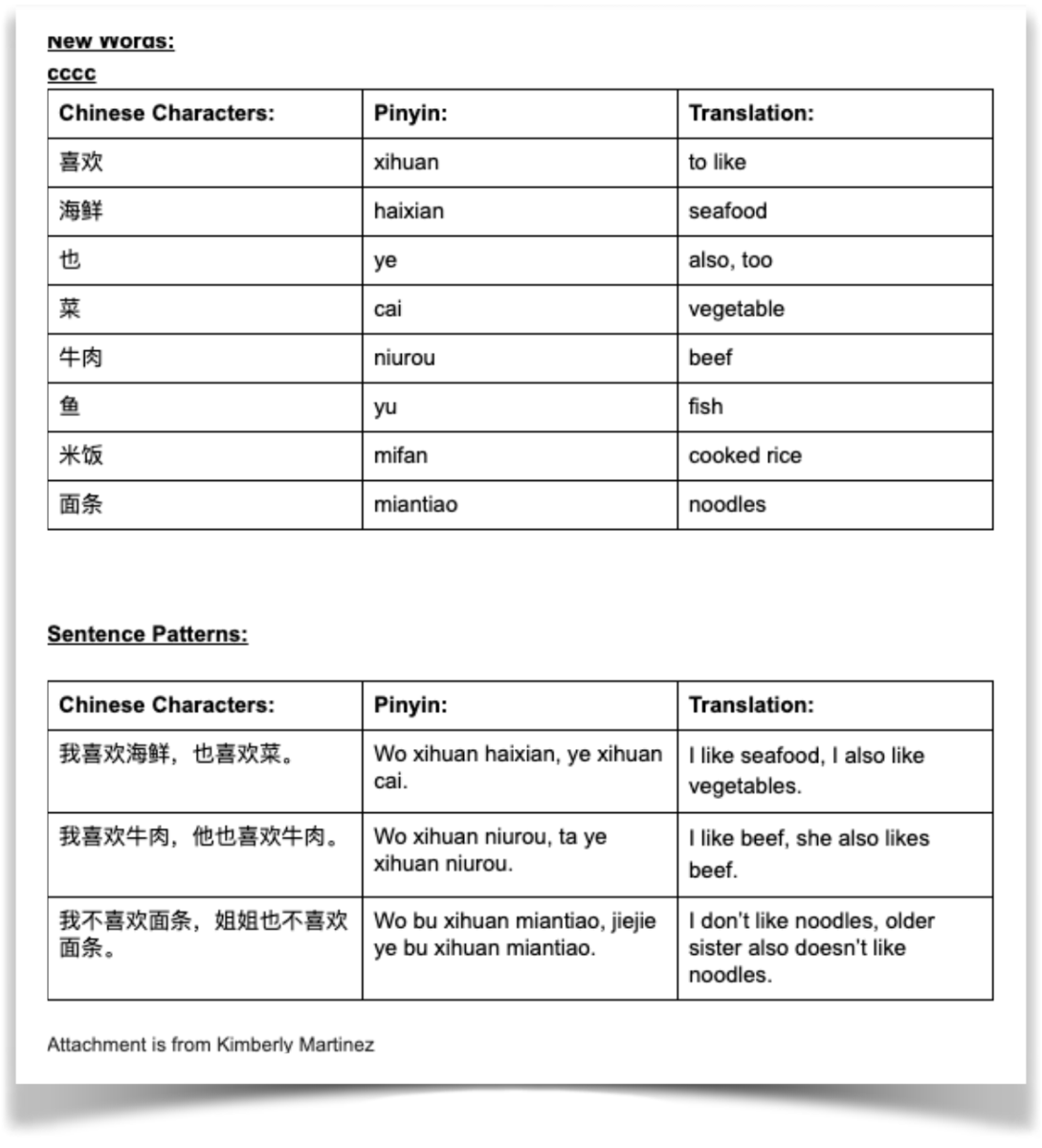 Congratulations to the Innovation Esports Teams!

Our Overwatch team fought valiantly all season.  Our Rocket League team made the playoffs with a record of 7-2.

And out of 298 players in the league, our SuperSmashBros team had 9 players qualify for playoffs with 4 players making it to round 1.

Gerardo DeLeon and Luis Rosario both advanced past rounds 2 and 3, with Gerardo reaching the semifinals of round 4. 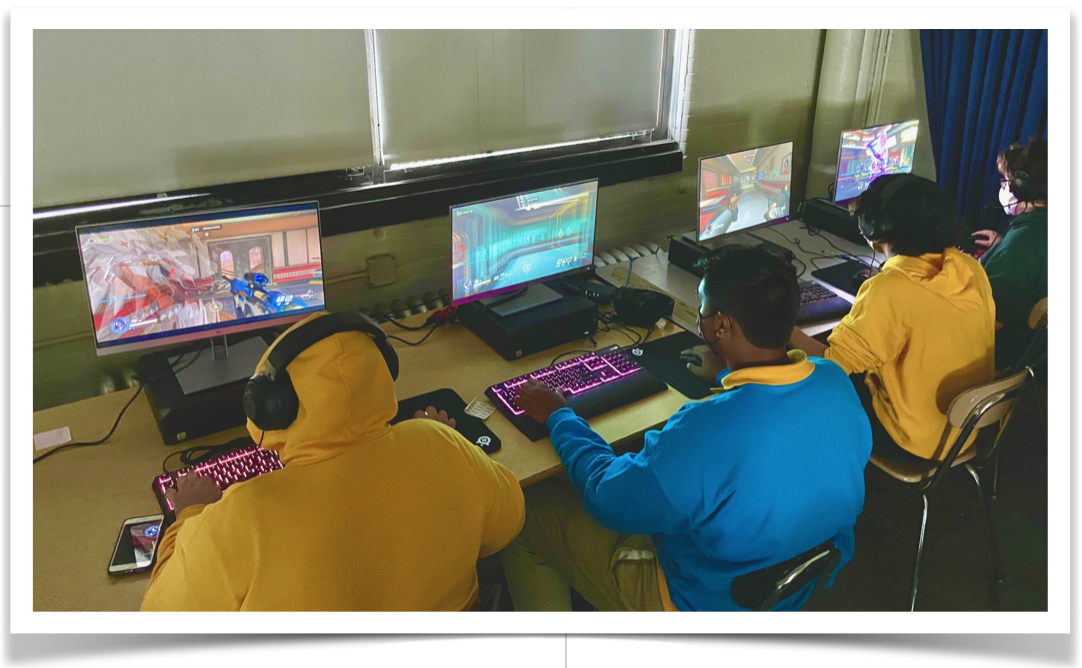 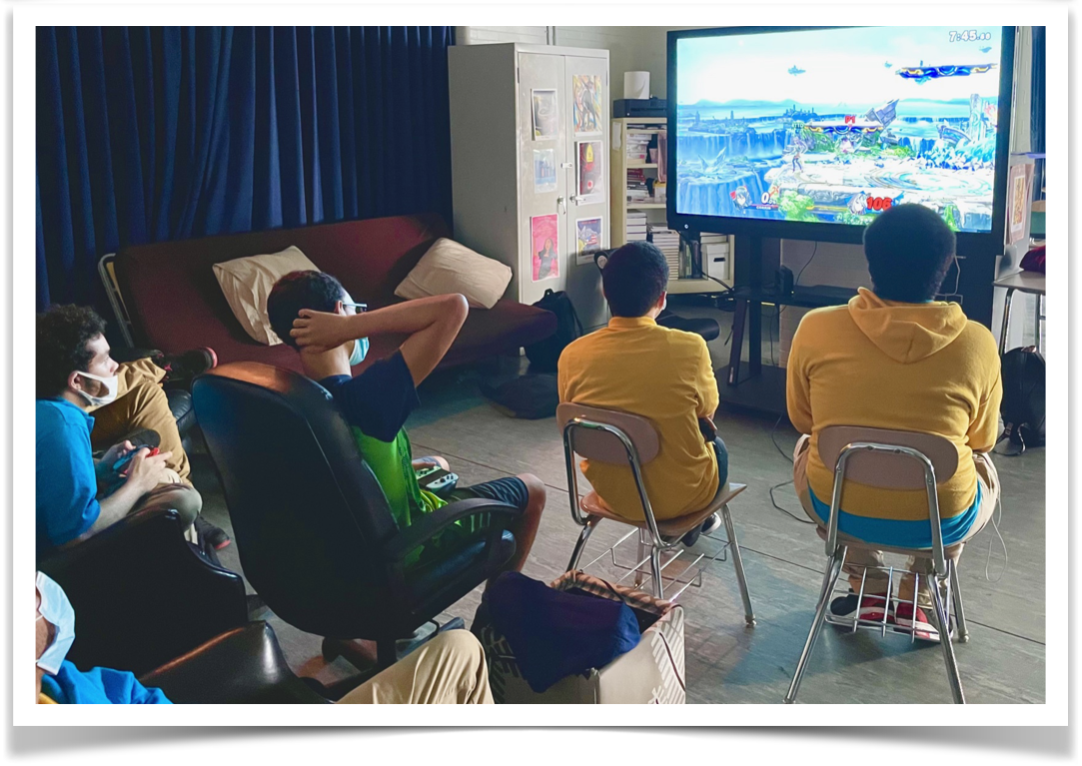 Students in AP Physics are at a level of understanding kinematics equations and using their applications in everyday life. Kinematics equations are utilized to determine movement of objects with accuracy like meteors entering the Earth’s atmosphere, how missiles can be launched to combat asteroids that can crash onto the Earth and threaten our existence. These equations can also guide the launch and landing of space shuttles, determines angles to shoot fireworks and many many more applications.

In class students worked on a project where they first understood the concepts of kinematics and then used these equations to determine the range and height a marble will achieve when launched at a specific angle. They had to use the calculations to target and hit the bull’s eye that they had prepared, using the formula.

The fun part was testing to see if their calculations were correct by using the marble launcher to hit the bullseye. Students were thoroughly engaged, which one can appreciate that in the picture below. They were able to prove that their calculations were correct by successfully landing the marble into the cup. Student's also enjoyed problem solving their unsuccessful first attempts. Many students were excited about potentially using water balloons later in the year and finding the angle to launch and how far it will travel to soak their teacher!

Students succeeding on the first try, amongst others were: Christopher Cruz, Ariel Grant, Shreya Modi and Kulsoom Haqqi! 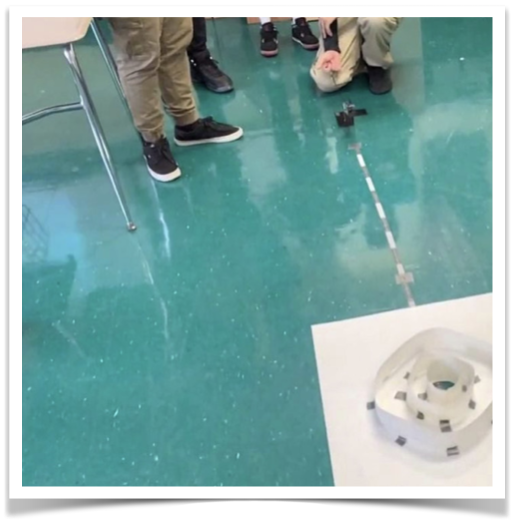 SOCIAL STUDIES DEPARTMENT
In the first semester, students in Mr. Mello’s US1 classes looked at the War of 1812 from the perspective of a  journalist living and reporting at the time.  Students chose from one of five major developments in that war, which many historians refer to as the Second American Revolution.

Over the Thanksgiving break and beyond, students drafted a 200 word newspaper article on one of the major events of the War of 1812.  Their article topic of choice was one of the following:

Included in their articles was an actual newspaper name & location from the time; a newspaper masthead; the 5Ws (who, what, when, where and why) of their topic; and a line drawing illustration to enhance their news event coverage.

In this sample, Janki Patel writes an article on the burning of Washington.  She does a good job, in this first paragraph, of covering the basics of most of the 5W’s, while saving more in-depth coverage for later paragraphs.

Mr. Mello enjoyed watching his students deeply consider and gain understanding of how news and information was shared centuries before Snapchat, Instagram and smart phones dominated our daily lives. 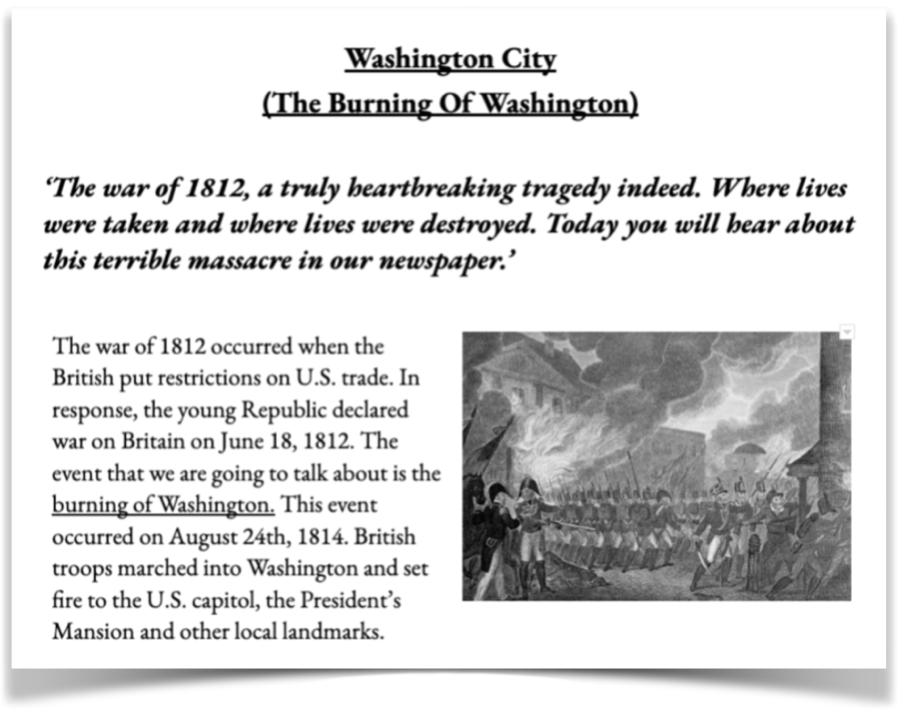 Fine Arts Through Technology
Students created self portraits that included symbolism of their culture.  Here is an excerpt of a student's artist statement:

"During this art piece, I have learned what symbolism means. Symbolism has different meanings to it. It could mean ¨an artistic and poetic movement or style using symbolic images and indirect suggestion to express mystical ideas, emotions, and states of mind¨ or ¨symbolic meaning attributed to natural objects or facts.¨ What I wanted to represent in my art piece was my cultural background. I am a mix of Irish and African-American. So to show those two family backgrounds, I wanted to show it as a mural of a person drawing a family tree. I wanted to make it look like I'm painting a mural inside of the art piece. This was a bit of a hard piece due to me barely knowing anything about both sides of my family, especially my father's side of the family. The Dashiki represents my mother's side of the family. The tree with the clovers symbolizes my father's Irish side of the family. I had added grapes to the mix due to having an Italian stepmother." 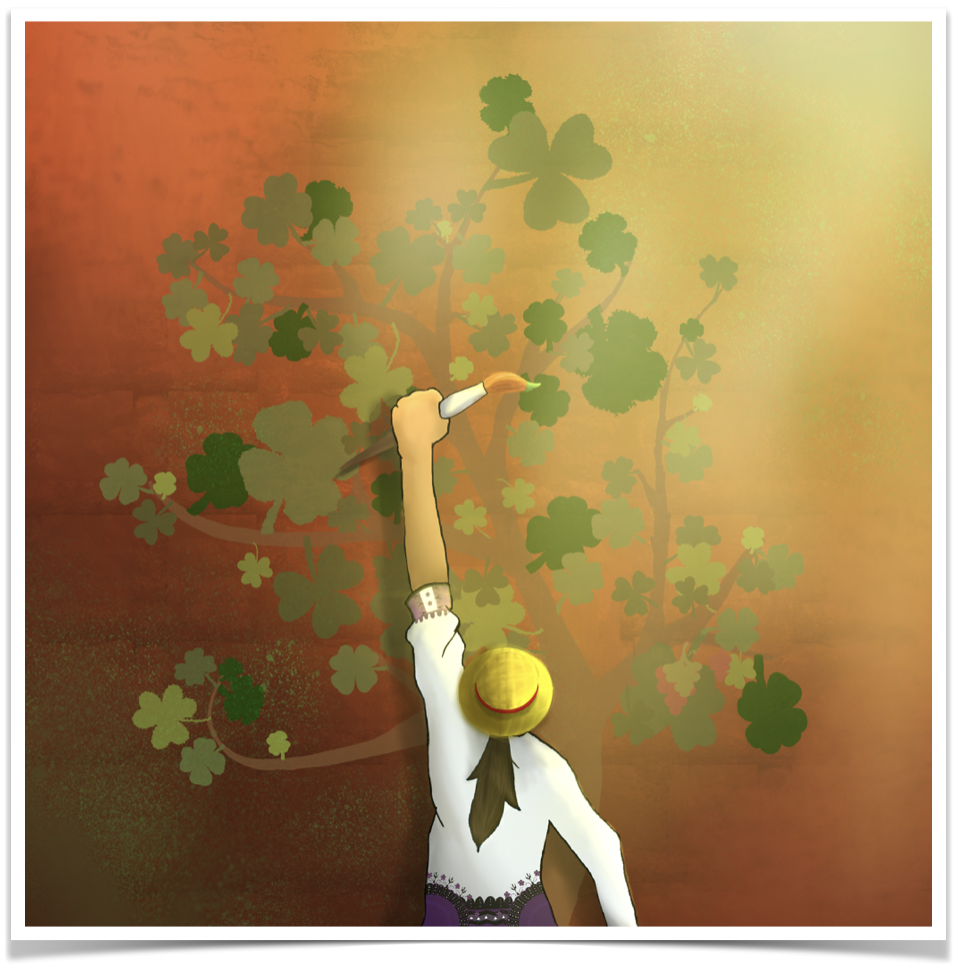